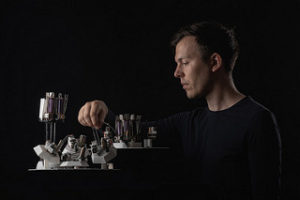 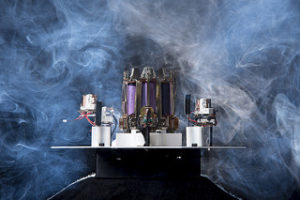 Moritz Simon Geist is a performer, musicologist, and robotics engineer. He started because he wants to invent the future of electronic music – with robots! Geist’s projects range from robotic music performances to robotic sound installations. His robotic instruments and performances have been shown in numerous European festivals and exhibitions throughout the last years. He collaborates with performers such as Mouse on Mars or Robert Lippok and teaches on the progression of technology and society at the NYU Berlin. He was awarded numerours internation awards. His background is both as a classical musician and a robotics engineer, with an expertise in prototyping technologies and 3D-Printing.

“These are new machines, manufacturing a new kind of machine music.”

“It doesn’t get much geekier than this!”

“When Moritz Simon Geist plays a techno show, Moritz Simon Geist doesn’t reach for a laptop. Instead, he calls on his army of sonic robots—a collection of small, motorized creations that click, clank, and whirr in an intricate mechanical symphony. The result isn’t just a dynamic, throbbing album full of electrifying techno. For Geist, it’s a way to push the frontiers of electronic musicmaking.”